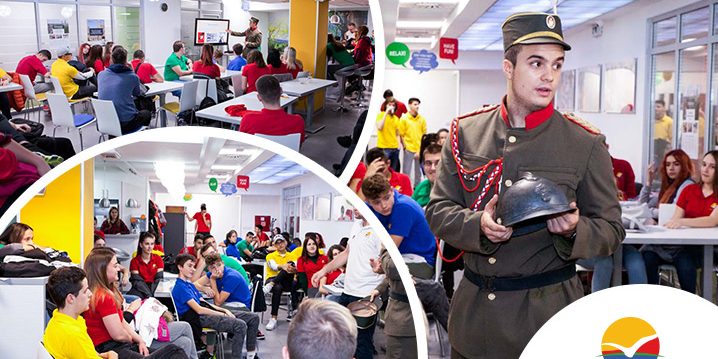 On Tuesday, 12 November, Savremena’s Year 12 student, Uroš Jež, gave a presentation on Armistice Day, commemorated in Serbia on 11 November. The presentation was well-attended, as all the students were interested to see and hear what Uroš had to say.

The meaning behind Armistice Day

On this day, Serbia celebrates Armistice Day, in memory of the day when armistice was signed between the Allies and Germany on 11 November 1918. The day of German capitulation in World War I has been declared a national holiday in Serbia. The badge worn on this holiday combines Natalie’s Ramonda, or the phoenix flower, and the Albanian Retreat medal. Armistice Day is also celebrated in Great Britain and in Commonwealth countries.

Uroš Jež, a Year 12 student, held a presentation fully dressed as a World War I soldier. He wanted to give his classmates a better insight into why 11 November is significant for Serbia. Besides the fact that the Serbian Kingdom fought on the side of the Allies, Armistice Day marks the end of South Slavic occupation and the rise of a new world from the ashes. The day also commemorates the huge civilian and military losses suffered by the nation.

The effort Uroš has put into creating this presentation is captivating. He brought real historical items such as helmets and medals and told the stories behind them. He even brought his great great grandfather’s sword! How fascinating is that?

As long as there are students like Savremena’s Uroš, the sacrifice of our soldiers will never be forgotten.